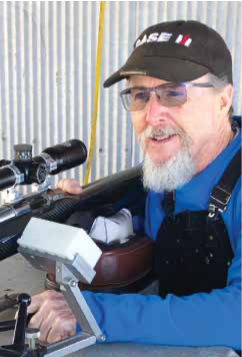 Congratulations to our Member of the Month – Greg King.

Please tell us about your family:

I live in Auburn, Illinois surrounded by 1000’s of acres of corn and soybean fields. I’ve been farming since 1973.

How many years have you been shooting:

I got a taste shooting a factory match in 1991 with Ron Hoehn at the old St. Louis Range that flooded. There were 3 of us and I won the match. Boy was I hooked. That was 31 years ago.

What is your favorite NBRSA matches:

I like all the matches. I can get to East West; Cactus; Rattlesnake; Mill Creek; Supershoot and Charlene’s Meadow.

Where is your home range:

What makes these matches so special:
Getting to shoot with people you might see once a year is great. Enjoy catch- ing up, hearing stories, telling stories and trying to put 5 bullets in the same hole. I’ve met and become friends with people from all over – that’s priceless.

I’ve traveled with buddies Lou; Harpenaux and Carstenson. But being a farmer it’s hard to plan ahead some- times. Last minute ill throw stuff in my pickup and drive away.

I’ve left a match before too because we had soybeans that were ready to cut. I’ve got to go.

What rifle components do you use: I shoot a Neuvo Action in a Scoville Stock, Bix N’ Andy Trigger, Bartlein and Krieger Barrels with Nightforce 42.

What has been your highest accomplishment: I’ve won 2-Guns in St. Louis, Kansas City, The Rattlesnake in 2020 and it was cool winning Richards first registered match in Char- lene’s Meadow.

Greatest benchrest memory to date: After getting a taste in St. Louis with the factory class, Dan Dowling and Truman Wil- son built me a real gun. That winter I thought I’d drive to Phoe- nix in February. Found the range – practiced Friday. Next day the match started and I started seeing all these guys I’d been reading about in the magazine – Gary Ocock, Don Neison, Chuck Miller, Dennis Thornbury, Tom Libby, Lowell Frei, Eric Stecker and the “Walt Berger”. I thought to myself, “what am I doing here?”. Later that afternoon I must have been doing ok as I walked back to reload, Skip Otto said, “hey, what are you shooting?”. I told him Accurate 2015 and Berger Bullets. As I walked on I heard him say, “bleeping new guy kicking our ass with bleeping 2015 and Berger Bullets”. I’m sure he was using T Powder and Euber’s. After 2 days, I took 9th in the Sporter Grand, 2nd in the Light Gun for 2nd in the 2-Gun. Also won a match and got a silver dollar – I’ve still got that coin Walt gave me that day. Gary Ocock was first…now I was really hooked.

What was your funniest moment: Just goofing around at matches. You’ve always go to keep your gaurd up. Someone’s always up to no good.

What are your future goals: Hopefully win more matches.

Advice to new shooters: Go to as many matches as you can. You’ll pick something up every time you do. I’m still learning… and as my buddy Chet Whitebread tells me, “never give up”.